(An acoustic solo artist.) A strong Jimi Hendrix and Bob Marley fan.  Organiser of "Open Mic," Events. Studied music and music technology at (Telford Technogical College and Stafford University).  He is very much at home in small venues as he is in large venues and open air events, such as (Festtivals, Music in the Park & Summer Raves). His debut single "Let it Shine," is available as MP3 download, CDs and Vinyl. Nathan also plays in bands, to explore the logistics of touring. Nathan, during his time at Stafford University had a regular weekly "Open Mic," Event, in one of the entertainment venue in Stafford.  During his time there, he gain a solid following of fans.  And constant request from other venue owners to organisie and promoting events at their venues. 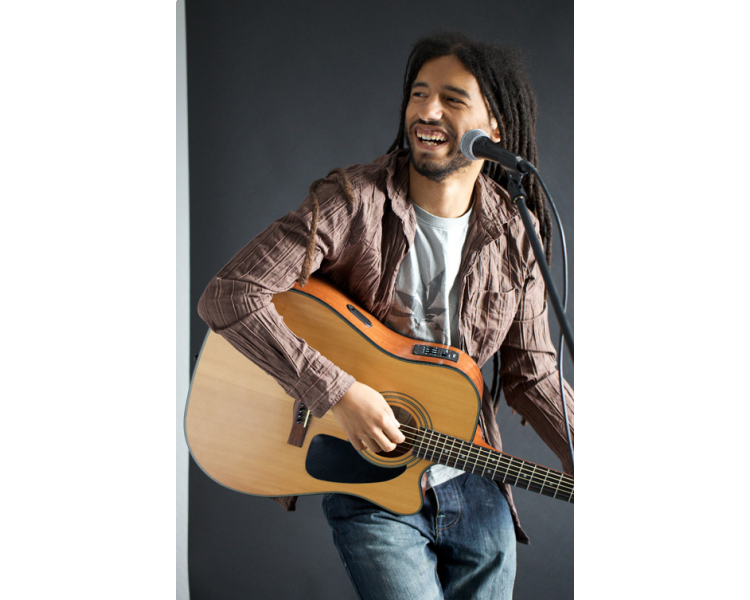 Skip to the beginning of the images gallery
Details

His latest release entitled, Let it Shine... (A Folk/Pop song. With awareness lyrics). Nathan's first single, (Words and Music by Nathan Alexander) released on Octavia Records Label. Its content is part of the now trend amongst the younger generation. Not only saying they care about society and the world, but are doing something about changing its direction. "Let It Shine," I believe, tell the direction Nathan Alexander is heading. Those who have been to his gigs, say, they enjoy his performances and looks forward to the next gig. Engaging with Nathan, on his page on this website by registering as a fan or to recieve updates and him.

(Base in Telford, Shropshire, UK)

He Plays the Guitar, a hugh Jimi Hendrix & Bob Marley Fan.  Studied music technology and management at Telford (Technical College) and then went on to Stafford University.  After leaving school, Nathan was unsure of what exactly he wanted to do with the rest of his life. Not wanting to work in his father joinery factory. In a very deep conversation with his father, he decided to seek further education. He then, enrolled in Telford Technical college to learn some skill. He then said, "One day he was passing by a building in the grounds of the college, he heard music playing. On entering the building, driven by curiosity, he realised he had entered into a recording studio. Then like fireworks going off in his head, he felt he found the career he was looking for."

Tickets would soon be available. From this website later in the year.

Tune In to Nathan's Interview:

On the BBC Radio on Friday Night.

OctaviaMusic: (Soon To Be Release) Podcast.

Join Nathan's Fanbase here and get information on Tours, Gigs, and Tickets:

This year's Eurovision song contest 2021, is a reboot of the music festivel competion first held on the 24th May 1956, in Lugana Switzerland and the winning Song was "Refrain." Except for last year 2020, when it had to be cancelled because of COVID-19 pandemic.  Its a different format this year because of the stringant regulation still in place.  But I am looking forward to seeing the acts go through their routines.  Or should I say, their performances, which sometimes are more political than festive.  It is the biggest musc festival/event/contest in the world.  So successful is the format that the Americans are planning on launching their own version.

What has always been surprising to me over the many years I have been watching/listening to the festivalish/contest/competition, is that every proceeding year, those taking part, trys to replicate the winning song of last year.  And so instead of having innovation, we are getting more of the same, or a pale version of last year's winning song.  And the performance almost always follows the past.  My view on looking at the Eurovision Song contest/competion, is that its a golden oppertunity for music creators to be innovative.  I am aware that the contest were and maybe still are an event for the armeture level of music creators. But it could be, that the selection and voting are controlled by government organisations.  Could be the reason why its at the level of enjoyment that it is.  Intead of it being culturial, its nationalistic.  Therefore, the viewers think and vote on that basis.  Had it not being for COVID-19, we would have experiance the true difficulties that Brexit posed on the entertainment industry, for british performers and audiance, who would have been travelling to fill the events with their presence. And for now, we can only imagine the problems we are yet to face, because of the changes that had been brought about, because of brexit.

It is my belief, that had the Eurovision Song Contest, were to be run by the music industry. There would be more innovation, after all it is the biggest audience for any event or festival. And those taking part would at least have sound advice and guidance. And if the status does not allow that principle. Then thats a topic for discussion.  At a time, when the music industry has lost its platform.

Sunday after the Eurovision Song Contest.

We now know who walked away with the trophy (Italy) and where the sportlight would be shining next year.  Italy.  Once again, the UK was no vote from the countries vote and the public.  At what point would someone say, "Let's take a different look at how we go about choosing the song and the singers?" Or is the sentiments about something else, that I am not aware off?  If we believe that the vote has no reflection on the music industry in the Uk, then there's no need to make changes.  But if that is not the case, then we in the industry needs to express the need for changes.  If we are waiting on the cultural secretary to invest and take the lead in bringing changes.  Then, this no vote situation would remain for a very long time into the future.  To see the ditermination and enthusiam that was expressed on the faces of those in the hall.  And the hard work and co-operation undertaken by all the countries involved.  I would say, the portentual for up and coming music creators are hugh.  Oh, but wait a minute.  Didn't the new regulations brought about by Bexit, makes it harder for performers from the UK, to ply their trake/profession to the wider audiance in Europe.  And so far, I have heard nothing about the work the cultural secretary is doing about changing this situation.

Visit our store and buy yourself, t-shirts & Caps or sheet music

In the 1960s & 70s Uk music and performers was the most sort after in Europe.  Even, with the difficulty of laungages and borders, musicians, artist and performers were able to make a living, working in Europe.  Now it seems, Europe is doing their brand of Pop, Rock, Heavy Metal, Indies, etc. and loving it, Thank you very much.  So, the question, one should ask is, "Where do we go from here?"  Do we continue to put our heads in the sand and say, as we often do. "We are doing fine.  We are the best in the world?"  In my rearview mirror, I'm asking, "How much more "No Votes," can we take before we are shock into action?"

Nathan's single released as a download, CD and Vinyl.